The arsehole I quoted in my previous post done gone all shy on us, and has made his account with WalesOnline available only to ‘friends’. (Don’t laugh! How can you be so mean?) As his account is where I mined the gems used in yesterday’s post, and because I have no intention of wading through page after page of bigotry on WO, the supply is at an end. However! I managed to grab more gems than I used in my earlier post. So, to keep you chuckling over the weekend, here they are. I have not bothered with comments this time as I’m sure you can make up your own. 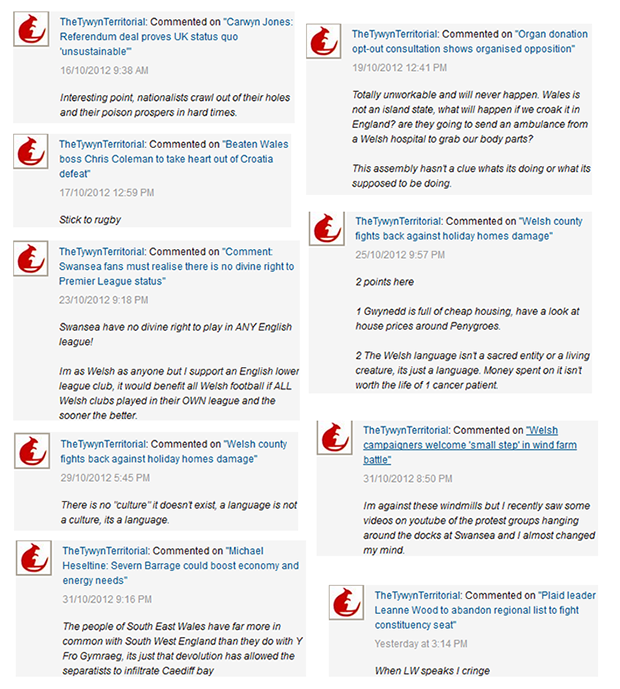 OTHER NEWS: Please compete the Libingo survey. As for BiLingo itself, someone is telling me that he is convinced it’s Gogwatch and Glasnost re-born. Any other thoughts out there?

The BiLingo Twitter account, @OG58630160, seems to have gone out of business and been replaced by @BilingoWales. This new account has an eclectic mix of Followers, none of whom may actually support BiLingo! (DET no longer one.) The tweets are worth reading, such as “ONE world ONE language”. And to think that we mistook this for the work of a local bigot, when in reality it’s a plan for the English language to conquer the world!

The other Twitter account from which I received an unsolicited tweet supporting Bilingo, @tibtabx, seems to be in a state of suspended animation. While @belowlandsker, who also tweeted me a few days ago in support of BiLingo, has seen no activity today.

Bilingo, Tibtabx and Belowlandsker all set up websites and /or Twitter accounts very recently, give evidence of being known to each other (if not connected), and all push the same message. Which ties in with what was suggested to me earlier today: One person working behind multiple identities.

If this can be proved, then certain media outlets can be made to look very, very stupid. Do what you can.

UPDATE: Someone else making the Gogwatch connection.