Just over a week ago I got to know of BiLingo, a website critical of Ceredigion’s

language policy. Going to BiLingo’s Twitter account (OG58630160) I saw that it had just two followers: an American who follows everybody, and Dafydd Elis Thomas. Which was odd, seeing as BiLingo described itself as a group of concerned parents . . . parents who were obviously not concerned enough to follow their own Twitter account!

BiLingo is in the news again today, so I checked back on Twitter. Now there are 14 followers (not all sympathisers), but BiLingo now claims to be no more than a “Mouthpiece for concern over the current administration of the Language Strategy in Ceredigion schools”. In other words, just another sad and lonely bigot with a computer and an internet connection. 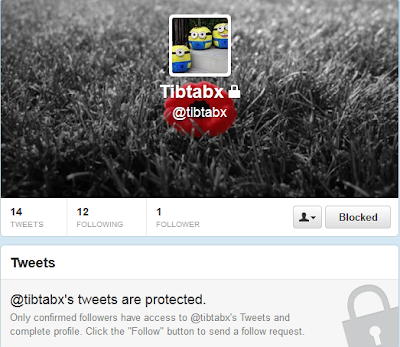 Even before tweets in the past few hours drew my attention again to BiLingo I received a tweet this afternoon from @tibtabx. A hostile tweet which made no sense at all, seeing as it seemed to be answering something I hadn’t said. Naturally, I wanted to learn more about the sender, so I checked, and found this. (Left.) Now I don’t profess to be too clever with social networking and lots of other things connected with computers and the internet, so I’d like some help here. My guess is that this is a new Twitter account, but why would it be blocked to others?

Getting back to BiLingo, the reason for the Twitter activity this evening is that there are stories in both the Daily Mail and the Daily Telegraph today uncritically repeating BiLingo’s accusations. Which I find amazing. Two ‘reputable’ English newspapers have run articles that smear a county (if not a whole country), its education system, and its teachers, on the word of an unnamed source. For nowhere, in either article, do we read the name(s) of whoever’s making these allegations. No doubt this serves the purpose of suggesting fear of retribution.

But of course we’ve always had the anti-Welsh among us, it’s nothing new. The real lessons to take from this episode should be: 1/ Never trust the English media. 2/ We’ve been too reasonable for too long with people like BiLingo, and look where it’s got us! From now on be as intolerant and unreasonable as they are. What’s to lose? The press coverage won’t get any worse. And once they realise they aren’t going to get their own way they’ll shut up or go home.

UPDATE 16.11.12: Predictably – seeing as it has been ‘cleared’ by important English newspapers – the Wasting Mule has summoned up the courage to use this ‘story’ today. (Which reminds us yet again why dead fish should be treated with more respect.) But if it was an anonymous nationalist website making outlandish claims would the WM use that story? No. Or rather – and I’ll tell you something now from personal experience – once alerted to the allegations the ‘Welsh’ media would have seen it as their duty to ‘unmask’ (the word they’d use) the author. Why is this case different?
Probably because the sentiments being expressed by BiLingo chime with the views of too many in the ‘Welsh’ media. Furthermore, I guarantee that whoever is behind BiLingo has a whole package of grievances. Because do you really think this person is happy with the political and constitutional direction in which Wales is travelling, and that language teaching in certain Ceredigion schools is their only grievance?
Whover is behind BiLingo has generated a lot of publicity hostile to Wales and the Welsh language. They have achieved this in a dirty and underhand way that would not have been tolerated if similarly unsubstantiated allegations had been made by ‘the other side’. This is shoddy and biased journalism. There should be no more publicity until we have the name or names of those behind Bilingo.