Most people visiting this blog don’t necessarily share my mildly right of centre views, and so I suppose they won’t be regular readers of the Daily Mail. (Though neither am I, preferring the Telegraph.) So they won’t have read the in-depth article by Richard Pendlebury carried by the Mail last Friday about the organisation Common Purpose. Described by the Daily Mail as “the Left’s old boy network”, which in some respects it is.

Common Purpose is, according to its founder, Julia Middleton,an organisation that trains and educates people who can then “lead beyond their authority and can produce change beyond their direct circle of control”. Now give that ambition some thought for a minute; conjure up in your mind the image of the police constable who, due to his Masonic rank, has unseen authority over higher ranking officers in the police service. Surely a situation we should be seeking to end, rather than allowing it to be imitated by another organisation? 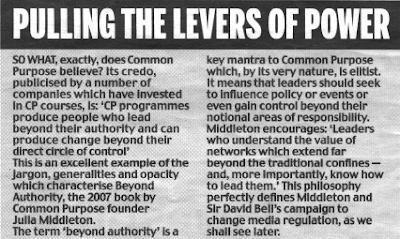 Talking of her inspiration for Common Purpose, Ms Middleton quotes in her opus Beyond Authority, a certain Doug Miller: “You start with clear and defined objectives . . . Then you establish what the objectives are . . . they are usually people. So you have to establish what motivates them, and then decide if you can win them over by the power of the idea . . .
Sometimes, if it gets messy, you might have to run over them, undermine them, go around them or discredit them. As a last resort, you consider bullying them, or buying them off”.

“Discredit them . . . bully them . . . buy them off”. Sounds more and more like the Freemasonry we’re more familiar with. Because of course, in a country without a public school system to produce the Old Boy network it is Freemasonry that Common Purpose has to challenge and displace in Wales. Especially in local government. Given Common Purpose’s established links with the Labour Party it is easy to see the organisation’s influence in the Local Government Act 2000. This legislation gave us the cabinet system, in which a chief executive aided by a small number of compliant councillors can rule a local authority. What a wonderful arrangement, especially if the chief executive and a couple of the cabinet members are Common Purpose ‘graduates’.

The downside of course is that the cabinet system undermines democracy. For it makes redundant the majority of the elected councillors in order to give authority to a paid official without a democratic mandate. But then, this is probably what CP means by ‘leading beyond authority’. To see the pitfalls and drawbacks of the cabinet system we need only look to poor old Carmarthenshire; now the laughing-stock of Welsh local government, being unfavourably compared with North Korea, its people crying out for UN intervention.

It should be obvious to you by now that Common Purpose is a Leftist freemasonry, a creature of New Labour. It may even have been set up specifically to counter the influence of what it sees as Rightist elements such as the Freemasons, unfriendly newspapers and other bogeymen (by behaving in almost exactly the same way!). Being part of the Labour Party network of influence it should not surprise anyone reading this to also learn that Common Purpose is very well represented in the Third Sector. Ah! the Third Sector, yet another way of exercising authority, influencing politicians, accessing public funding – and all done without the inconvenience of having to submit one’s programme to the judgement of the Great Unwashed.

Here’s a short video of Julia Middleton talking about Beyond Authority. I don’t wish to be unkind . . . but something in those eyes, and the Cheltenham Ladies’ College delivery, make me feel rather uneasy.

Because Common Purpose is Leftist and right-on, inclusive (unlike men-only Masons), anti Telegraph and anti News International, supported by the Guardian, we can almost guarantee that Plaid Cymru thinks it’s a wonderful organisation. Blinding itself to the danger of so much power passing into the hands of so few – unelected – people, in local government, Third Sector, civil service and other fields, many of whom had no connection with Wales before coming here to take up positions of power and / or influence.

Common Purpose is just another mechanism for maintaining and exercising England’s control over Wales. Just because Common Purpose ‘graduates’ tend to be more hip and presentable than their more obviously corrupt and venal Freemason counterparts, just because they may not go in for knee-flashing and funny handshakes, should not make them any more acceptable. They have other ways of recognising each other, and helping each other. Ways of which the ‘outsider’ will be ignorant. So in practical terms, is there any real difference between Freemasons and Common Purpose?

Common Purpose is a threat to democracy. The operations of Common Purpose are inimical to Wales’ interests and hostile to Welsh traditions, for we have always believed in openness and democracy. Make enquiries and expose this outfit wherever and however you can. It is another enemy within . . . and its influence is spreading.

One thought on “The Enemy Within 3: Common Purpose”