In the absence of any information to the contrary I assume that the arrangements for this year’s commemoration – held on December 8th and 9th – follow the same timetable as last year. Though I have no idea who the speakers are, or if there’s entertainment on the Saturday evening. (How difficult would it be to circulate bloggers like me with the details? If you want people to turn up – let them bloody well know about it!) Also conspiring to keep down the numbers of those attending Cilmeri has been the Labour Party which, in recent months, has come up with the kind of ‘Shock! Horror! – Nationalists! revelations that devalue political discourse. (Yea, even Welsh political discourse.) I have commented on this silliness in a previous post, but I’ll return to it later.

For those who’ve never been to Cilmeri, but might consider going, here’s a brief run-down of where it is, what it’s about, what goes on there, and who turns up. Cilmeri is a couple of miles from Builth on the A483 (Llandovery road). Despite being a rather out-of-the-way place it is surprisingly easy to get to. The A483 links with the A40 and the A470 runs through Builth. In addition, you can catch a train from Swansea and Llanelli (or, from the other direction, Shrewsbury) to Cilmeri Halt. What draws people to Cilmeri is the monument to Llywelyn Ein Llyw Olaf, last Prince of Wales of the House of Gwynedd, who is known to have been killed near here by English soldiers in 1282. 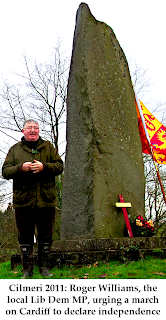 Commemorations began in the 1960s, those wonderful years when I was young and anything seemed possible. (Wistful sigh.) Inevitably, those organisations then active in Wales, such as the FWA, were in attendance. But just about everyone was welcome, for it was a chance to meet people you might not have seen for years. The Big One was of course the 700th anniversary in 1982. That well-known warmonger and general no-good boyo Gwynfor Evans was there, as were other notables in the crowd of at least two thousand. I stress this because the truth about Cilmeri is that – apart from the ceremony and the speeches at the memorial itself – it’s rather a fun event, attracting an eclectic mix of people. Even the Labour Party is represented. For Councillor Ray Davies of Caerffili – accompanied by his Red Warblers – is a regular; and I know he’s not the only Labour Party member who attends.

So we have a Welsh day out to which everyone is welcome which, I suppose, leaves the question: why is the Labour Party at Assembly level so hostile towards Cilmeri? It would be nice to say that Labour’s attitude to Cilmeri was an isolated case; that in other ways Labour was entirely supportive of celebrating Welsh identity and remembering Welsh history. But it’s not. Cilmeri is the rule, not an exception. So how do we explain this? I suggest there are two strands interwoven to produce the kind of nonsense we’ve heard from Vaughan Gething AM and others in recent months. 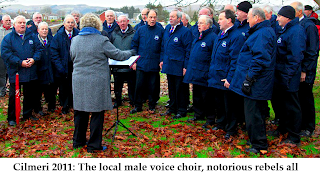 First, there’s the traditional Labour view that Wales did not exist until we experienced the Industrial Revolution, which created an urban working class. The struggles of Llywelyn, and Glyndŵr, were devoid of any national (let alone, nationalist) dimension. It was simply an ongoing struggle between brutal, land-grabbing feudalists, some of whom may have been Welsh, certainly, but were driven by exactly the same impulses as their Anglo-Saxon, Norman, Anglo-Norman and, finally, English, rivals. Though I’ve never understood how the Industrial Revolution could simultaneously bring into existence Welsh nationhood and the class consciousness that rejects national feeling as something imposed from above to divide the international proletariat. But then, there’s a lot I don’t understand about socialism . . . maybe I wasn’t listening. 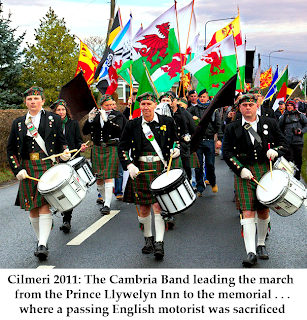 The other strand is altogether more difficult to explain, for reasons that will become obvious. There is an old theory that says the Labour Party in Wales was built up and initially supported by immigrants to the industrial areas – mainly English and Irish – in rejection of the ‘Welsh’ Liberal Party, the chapels, the Welsh language, and the rest of the ‘package’. Which means that from its earliest days, the Labour Party in Wales was un-Welsh, if not anti Welsh. Obviously this position was softened over time, as the Welsh working class anglicised itself, and the Labour Party produced leaders who were unquestionably Welsh. But at some levels, this belief in the English-Irish Labour Party, hostile to everything Welsh, persisted.

So while I don’t expect to see Vaughan Gething at Cilmeri next month – even though he’d be most welcome, I’d even buy him a Babycham! – it would be nice to see the Labour Party give some thought to finally killing this old perception, rather than breathing new life into it by running to the media with silly stories that turn out to be nothing more than patriotic Welsh people celebrating their heritage and their identity. If this is so offensive to the modern, post-devolution Labour Party then maybe the old prejudices are not dead.

(The arrangements for the northern commemoration on Sunday the 9th are the same as last year with the only difference being the wreath-laying at Gwynedd CC HQ being at 11:30 this year. I know this because someone had the good sense to inform me!)