The Woodland Trust, or as it is known in Wales, Coed Cadw, recently concluded the purchase of the 1000-acre Cwm Mynach, near Dolgellau, Gwynedd. Among the donations that helped Coed Cadw raise the £850,000 needed was one of £100,000 from a religious cult / business called Supreme Master Ching Hai International Association. Basically, another cult dreamed up by a charlatan who, like all the others, pretends she’s giving out enlightenment in return for the loot. But the Supreme Master is obviously a 21st century charlatan because she uses environmentalism to push her drivel. Two lies for the price of one. 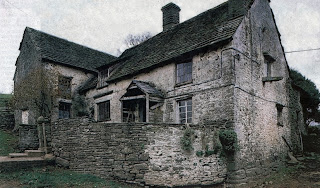 Then, this week, we learnt that Llwyn Celyn, near Llanthoney in Gwent (shown left), ‘Wales most “at risk” historic house’, has been bought by the Landmark Trust with a donation from the National Heritage Memorial Fund. Have you heard of either of these organisations? I certainly hadn’t until I read the story.
The more I read about the Landmark Trust the more I thought to myself, ‘Don’t the National Trust do the same thing?’ Which inevitably prompted the question, ‘How many organisations of this kind do we need?’
This led me to consider that these groups – Supreme Master’s shower excepted – are all, basically, English. So why should one English organisation be giving money to another English organisation to buy a piece of Wales? To these one could add countless others; such as the previously mentioned National Trust, or the Forestry Commission. How much of Wales is owned by these bodies? And how little by us?
Or rather, why don’t we have a Welsh organisation to take care of our heritage? (And I mean Welsh, not English Heritage (West Anglia)). Is it beyond the wit of those posturing buffoons down in Cardiff docks to launch a Welsh body to conserve our heritage? It would do more to inspire our people than any amount of turgid debate over the minutiae of LCOs or the funding for Ieuan Air. (Maybe the Supreme Master is worth a tap!)
But, then, I suppose to even broach the subject would put too many noses out of joint over the border. Those who bestride our land in fleece and tweed would think us very uppity and ungrateful if we were to suggest that it would be a good idea if a Welsh public body or charity took over the work of the National Trust, Landmark Trust and all the rest.
Interesting word ‘Trust’. Because at the end of the day that’s what’s lacking. I just don’t trust these organisations to represent our history, our culture . . . or us. But as long as Waggers get invited to their bashes, where they can be patronised by some aristo and rub shoulders with some bloke off the telly then nothing is going to change.Wales needs to be led by those who put Welsh interests first, and last. Whether these leaders are in the Assembly is totally irrelevant. Just like the Assembly itself.
Share this...