I remember reading that term in a Wasting Mule article some years back. Written by one of the silly young things the Mule employs either to keep costs down or because she’s the daughter / niece / daughter of friends / ‘niece’ / of some big shot at Trinity Mirror. For ignorance of Wales has never been a handicap to employment on ‘The National Newspaper of Wales’ or the Welsh media generally.

The term floated back into my consciousness a few days ago when I first read about the discovery of a ‘Saxon’ hall near Welshpool. After reading more, both in the County Times and on the BBC website I began to have doubts about both the find and the finders. From my reading of the media coverage all anyone can be sure of is that there may be the remains of possibly a 5th century building at Gaer farm. The description ‘Saxon’ seems to owe little to the evidence and a hell of a lot to the fact that those involved in the dig are English. 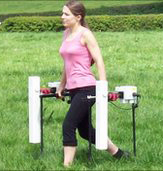 Naturally I decided to find out more about the brilliant archaeologists involved, Cambrian Archaelogical Projects (CAP) of Llanidloes. On perusing their website I learnt that CAP has many feathers in it; for as its website puts it: ‘We are an independent professional company offering a wide range of services from Consultancy on Planning Applications, Mitigation Strategies and Historical Research, to Excavation, Evaluation and Specialist Reporting’.

Not only does CAP do the groundwork for wind farm developers but it was also involved in the Milford Haven to England LNG pipeline. So, basically, CAP follows the big commercial contracts with genuine archaeology as a bit of a sideline. Which might explain the ‘Saxon’ claim for Gaer farm.

I say that because at the end of the 5th century the Germanic invaders were well short of the present Wales-England border. Indeed, this was ‘The Age of Arthur’, or at least that period when the Welsh rallied and the invaders were pushed back on all fronts. Consequently, if the remains at Gaer are 5th century, then they are not Saxon; in the unlikely event that they are Saxon, then they can not be fifth century.

CAP is now appealing for volunteers, and stressing that no archaeological experience is necessary. Probably because CAP’s ‘professionals’ wouldn’t want to be shown up by an amateur who knows his or her history.

To end on a more serious note: What self-respecting nation allows its history to be interpreted by its historical enemy? What nation allows foreign amateurs to roam its countryside, digging where they choose, informed less by knowledge than by notions of racial superiority? Why! we Welsh, of course! No, let me re-phrase that. We don’t allow it because we are not consulted on these matters. These things are decided for us.

P.S. It should go without saying that CAP enjoys the full backing of English Heritage (West Anglia), or as some would have it, CADW.