Things must be slow in the Labour camp because they’re watching YouTube again, looking for something with which to embarrass their opponents. Labour’s astute researchers have recently come up with two damning clips about Plaid Cymru. First, party leader Leanne Wood was filmed at some republican event down Cardiff docks and, more recently, party president Jill Evans MEP, has been outed as someone who mixes with ‘members’ of a defunct organisation. This is serious stuff, deserving of my attention.

If Labour is shocked by the news that Leanne Wood is a republican – the same Leanne Wood who has publicly referred to the English queen as “Mrs Windsor” – then they should keep up with the news a bit better. And if the brothers and sisters haven’t realised that the Free Wales Army went into voluntary liquidation back in the early ’70s, then they’re really out of touch. Yes, that is an FWA banner, held by people who admire the old FWA, and would pehaps like it to return, but that makes them little different to people in the Southern USA who wave the Stars and Bars – the FWA, like the Confederacy, done been and gone. 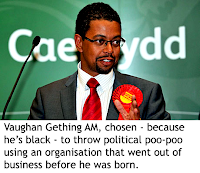 Significantly, the Labour politician chosen to make the earth-shattering announcement about Jill Evans cavorting with Unreconstructed FWA ‘members’ was Vaughan Gething, Welsh Labour’s Great Black Hope. Born in Zambia to a Welsh father and a Zambian mother Gething has described his father as “a white Welsh economic migrant”. Because by using Gething Labour hopes to suggest that the FWA is / was an extremist and, by extension, racist organisation, which means that Jill Evans is a racist. Bloody clever! No, it just means Labour is absolutely desperate to pretend to be doing something, anything. A pathetic ‘We’re still here!’ cry from the nothingness that is the Welsh Government.

Perhaps what really worries Labour about Plaid politicians mixing with republicans and FWA nostalgists is that these might actually believe in something. This would be sooo twentieth century! For under pressures from Bilderberg, EU, Common Purpose and other quarters modern politicians have crowded into the Centre where they have now congealed into an unappealing amorphous mass. (Dealt with here.) The thought that there might still be politicians out there unwilling to join the meld must be worrying. Though before you think I’m going soft on Plaid Cymru let me make it clear that in my opinion these women just happened to be in the wrong place at the wrong time, with cameras present. For anyone out there succumbing to the idea that Plaid Cymru is a radical nationalist party, just slap yourself and think of Helen Mary Jones (“that social worker” as she was recently described to me, in Llanelli), IWJ, DET, Cynog Dafis, Rhodri Glyn Thomas, et al. Rest assured that Plaid Cymru is right there in the do-nothing, self-emasculated Centre.

But if politicians and their parties are to be judged by those with whom they associate, then let’s turn the spotlight on Labour. And let us start with the Marxists and Trotskyists in the trade union movement. It would be bad enough if these anti-democratic elements simply supped pints with unsuspecting or unwary Labour politicians at conferences and elsewhere, but it’s worse than that – for these buggers help fund the Labour Party! Then there’s the third sector, so intertwined with Labour that they may now be inseparable, and may – please, God! – go down together. Just remind yourself (I’ll help) of the Awema / Malik scandal. (Follow links.) The Malik family were all Labour Party members. Or how about Helen Boggis? All was darkness ere this woman self-sacrificingly trudged to the Cynon Valley, where she was generously funded to be project manager for the Penywaun Enterprise Partnership. Earlier this year she was elected to RCT council but, it is alleged, her campaign used the resources and staff of PEP, a charity. If true, a very serious offence, for charities cannot be used in this way.

The truth is that Labour has always had very unsavoury bed-fellows, and worse, many unscrupulous people in the party itself. Cast your mind back to the advent of New Labour, and the promise of clean and open politics. Where are the architects of New Labour now? Well, the principals, Blair and Mandelson, are making serious money for themselves through contacts they made at Bilderberg meetings and elsewhere. Or what about Welsh Labour’s very own Neil Kinnock, and Glenys, and the kids – haven’t they done well? (Many of you have asked to see the photo again.) Rhodri Morgan may have boasted of “clear red water” between the Labour Party in Wales and New Labour in London but all that boiled down to was Old Labour – viscerally anti-Welsh; keeping Wales poor in order to ‘send a message’ to those wicked Tories (whether or not they were in power); and stifling Welsh entrepreneurialism in order to achieve the desired poverty and docile electorate.

The Wales we live in is a country ruled by English civil servants and the third sector; the first consolidating English rule and the second perpetuating and extending – even making a virtue of! – Welsh poverty and deprivation. The Welsh Government merely puts a gloss on this colonialism. It implements the legislation ‘suggested’ to it by the civil servants and Common Purpose ‘graduates’ of the third sector while maintaining the pretence that it is in charge. Making the Labour Party in Wales a Quisling regime, something “lower than vermin“.

Yet this is still the party that the “social worker” and others in Plaid Cymru wish to join in coalition. So for God’s sake don’t fall for cheap Labour smear tactics and start believing that Plaid Cymru is serious about Wales. It’s not. It’s going to take something else.