I am indebted to whoever posted certain comments to my previous posting regarding developments at Penrhys in the Rhondda. It makes worrying, but predictable, reading. From what has been provided and from what I have already gleaned it appears that we have here another squalid example of what can emerge from the third sector’s incestuous relationship with the Labour Party. The comments are available here in PDF format for you to read for yourselves.

After reading the comments I naturally went to the Rhondda Cynon Taf Homes website. The Home page conveniently provides a link to the Penrhys project, which in turn takes us to Independent Regeneration Ltd. In the final paragraph of ‘The Regeneration of Penrhys’ IR uses the word ‘local’ no fewer than five times, but of course neglects to mention that the company itself is based in a suburban street of detached and semi-detached houses in Retford, a small town in Nottinghamshire, England.

Going back to the RCT Homes website, the Board is made up in the main of Labour politicians, trade unionists, and third sector ‘professionals’. (i.e. professional at scrounging funding for ‘problems’ that very often don’t exist or are exacerbated by the third sector to provide more work for the third sector, which then ‘justifies’ more funding . . . ) Quite odd, when you think about it . . . the Labour Party is generally opposed to privatisation but is quite happy to privatise housing and other council work as long the contracts go to Labour’s members and supporters in the third sector. 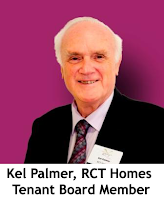 Given the Labour composition of the Board I was surprised to see the name Kel Palmer of Mountain Ash, there as a Tenant Board Member. Those of you who still read the Wasting Mule will be familiar with Palmer’s swivel-eyed unionism and royalism, displayed for all to see in his regular letters to said organ. Though I thought social housing was for those who cannot afford to buy a home. With Palmer on an RAF Group Captain’s pension – and possibly other pensions – I would have thought he could afford a place of his own, certainly in RCT.

Returning to Penrhys, we read:

“We have already started work to modernise all of the existing homes at Penrhys. In a £2.1 million deal with EDF Energy, new external wall insulation is being fitted on the properties under the UK Government’s Community Energy Saving Programme. The insulation is being covered with coloured render in a variety of pastel shades. As well as increasing energy efficiency, the improvements will give the distinctive 1960s housing a fresh, modern appearance.

Meanwhile, RCT Homes has joined forces with specialist housing regeneration company Independent Regeneration to submit an outline planning application to develop around 100 new, privately-owned houses at Penrhys. The predominantly detached and semi-detached houses would be built on eleven acres of land that has lain derelict since the 1990s.

EDF is of course a huge French company very busy with wind turbines. So, another example of a contract being given outside of Wales. But it may tie in with the ‘Energy Consultant’ to Independent Regeneration Ltd being one Bruce Pittingale, who runs the Carbon Special Reserve Wind Turbine Service, which acquires sites for wind farms. Given the involvement of EDF, Pittingale and Penrhys’ lofty elevation I think we can safely assume there will be a wind farm. But the plan stated is to get people to buy, even build their own, private housing on Penrhys.

There is, as my informant suggests, something very fishy about all this. A Welsh housing association gives a massive contract to an English company that exists in little more than name – and with an office address that keeps changing. But the man running this company is – according to my informant – a Labour Party member which, if true, probably explains how he got the contract. The RCT Homes contract was awarded to Independent Regeneration in July 2011 when ‘Penrhys’ entered the company’s name. But outline planning permission was not granted until September, 2012.

Finally, is it really a housing project or a wind farm? Both? There must be people reading this who can think of ways of getting more information about this very strange business. So I would be grateful for whatever you can dig up. Go for it; I have a feeling this could be quite a story.