This post was prompted by a comment made yesterday to my post of October 18th, which set off the train of thought you will find below. Though the comment itself merely drew my attention to the new language movement, Dyfodol i’r Iaith (A Future for the Language), and a speech made to its first AGM by Professor Richard Wyn Jones, a member of the new group’s Executive Committee. First, the comment; which read in full: “I was following the tweets from the new movement Dyfodol.net Richard Wyn Jones was speaking and he said that “Cefnogaeth y Cymry Cymraeg yn Refferendwm 2011 y Sofietaidd o uchel medde RWJ.”

Not sure Jac about your Welsh but he’s saying that the level of support in the 2011 referendum was at soviet levels amongst Welsh speakers. I suppose that means extraordinarily high but that since devolution this group have made the least use of the chances created. Or should that be that this group have seen the least benefits offered to them? Of course, these people may not be just supportive of devolution just because they speak Welsh; they are born and bred here for generations on the whole. There’s a brief summary of his speech on their web site. But it agrees with what you have said many times that those who have supported devolution have seen few benefits. Of course, the academic, and I believe the good man that he is, has concentrated on the language. It is after all a speech made during the setting up of a language pressure group. Just thought it may be of interest to you.”

In making a reference to the late and unlamented Soviet Union I’m sure Richard Wyn Jones didn’t mean to suggest that Welsh speakers were coerced into returning such a high Yes vote in last year’s referendum, but I suppose we know what he means. In a nutshell, Welsh speakers, particularly first language Welsh speakers, tend to be more nationalistic, partly due – and as the commenter points out – to the fact that “they are born and bred here for generations”. But this would also apply to many anglophone Welsh, so there must be other factors at work.
The commenter moves on to say that despite their support for devolution Welsh speakers have not done well out of it. I can’t agree entirely, for some certainly have (see below) but the Fro Gymraeg as a region has definitely suffered under devolution. As have the other areas that voted Yes in the 1997 referendum. To explain this, let’s remind ourselves of political analyst, Denis Balsom’s, political division of Wales (left), drawn up in 1985. Here we see the country divided into three parts along considerations of identification and language.
The ‘Fro Gymraeg’, is the region covering those districts with the highest percentages of first language Welsh speakers, (but also includes districts with the highest percentages of their population born outside Wales). ‘Welsh Wales’ is that region containing the districts with the highest percentages of Welsh born and high percentages identifying as Welsh. Finally, ‘British Wales’ is the label for those parts of the country with weaker identification with Wales and / or higher percentages of English born in the population than Welsh Wales, plus low numbers of Welsh speakers. We can all argue about whether this district or that should be moved to another ‘region’, but this is still a good model for understanding Welsh politics and much else.
Balsom’s model proved remarkably accurate twelve years later with the referendum of September 18th, 1997 on whether to set up a Welsh Assembly. This vote showed Y Fro Gymraeg voting Yes, as did Welsh Wales (with the exception of Torfaen and the addition of Bridgend). Predictably, British Wales voted No. (See map, right.)

These divisions, with minor alterations, keep cropping up again and again. Another example would be the division of Wales for EU structural funds. (See map, left.) Those areas qualifying in 2000 for Objective One, the highest level of funding, because their per capita GDP was below 75 per cent of the EU average, were almost exactly the same areas that voted Yes in 1997. (The addition of Denbighshire and Conwy can be explained by the GDP of these relatively affluent areas being brought down by ‘dumping ground’ resorts such as Rhyl.)

Which brings us back to Prof. Jones, and his remarks about last year’s referendum. (See map, right.) I believe there were a number of reasons why we saw such a high Yes vote from Welsh speakers. Patriotism and culture obviously play a part, as they did in 1997 but, given that most Welsh speakers live in the Fro Gymraeg, there was another reason. One that most commentators will ignore or deny. The changes taking place in the Fro Gymraeg are resented by many local people. Some are angry at becoming strangers in their own communities. And who can blame them!

The strategy employed has incorporated the following measures.
1Focusing economic growth and government jobs in Cardiff to draw thousands of well
educated and qualified first language Welsh speakers to the city from the Fro Gymraeg.
Thereby depriving the Fro of much of its natural leadership. A mild form of ‘decapitation’.
2In the Fro Gymraeg we have seen massive immigration – almost exclusively from England –
that has, in some places, and within a generation, turned Welsh-speaking villages into
communities that are not simply English speaking, but demographically English.
3 To disguise the damage done to the Fro Gymraeg by 1 & 2 the State has:
So as the number of ‘Welsh speakers’ rises Welsh as a community language dies, due to an inexorable fall in the numbers of first language Welsh speakers, linked with, and partly attributable to, the colonisation of the language heartlands. Threat dealt with! This is such an obvious deception that you have to ask why the ‘language lobby’ has fallen for it. But fallen for it it has. For there has been no serious campaigning for the Welsh language for over two decades.
The Good and the Great of Dyfodol i’r Iaith will be no different. They’ll hold their conferences and their workshops; they’ll issue their press releases; they’ll bring out scholarly, well-researched papers; they’ll build up a harmonious working relationship with politicians and civil servants . . . and achieve little beyond yet more ‘official recognition’ for the Welsh language, which will offer nothing of any practical value to 95 per cent of Welsh speakers, and do nothing to save the Fro Gymraeg. This will be explained as ‘working with the system’ rather than being ‘confrontational’. In much the same way as socialists justify accepting peerages.
********************************************So what do all these maps tell us? Has Wales changed in the age of devolution? The tripartite division still holds good for now, though the Fro Gymraeg is of course doomed. Not so much because it’s being ‘nibbled away’ at the edges, but because it’s collapsing from within. While areas of British Wales do seem to identify more with Wales now than they did previously. In the case of Cardiff, this owes a great deal to the internal migration referred to above. Leaving Welsh Wales as the least changed region.
The areas that voted Yes in 1997 did so for two reasons. One reason was a simple declaration of their Welshness. The other was the hope that the economic situation of their area would improve under a Welsh government. They have been betrayed; Welsh Wales and Y Fro Gymraeg are poorer today – relative to ‘British Wales’, the UK, and Europe more generally – than they were in 1997. Devolution is undermining the Welsh identity of these areas while simultaneously deepening their poverty. This betrayal can only happen when the loyalty of a section of the population can be taken for granted, made easier by the fact that too many within that population refuse to believe that ‘their’ government is not acting in their interests. The sad truth is that too many of those who care about the future of Wales placed their trust in a system (for this is not a party political issue) that never had any intention of repaying that trust.

So, taking the long view . . . Wales in 2012 is no different really to Wales in 1812 or even 1312. It doesn’t matter what the system is called, or how it’s presented, it remains the same: a system designed by others, to benefit others, and to keep us Welsh at the bottom of the pile. (With a few allowed to rise for the purposes of window-dressing.) It is surely time for more people to wake up to this fact; to stop playing silly party political games; stop being selfish, and realise that we are engaged in a struggle for our national survival.

UPDATE 03.11.12 Earlier today I noticed this tweet about Wilkinson’s store in Pwllheli. The situation is the same in the company’s store in Porthmadog. I also mentioned Tesco in Porthmadog in the original blog. There are countless other examples. So I have to ask why doesn’t the county council, or the town council, step in to defend the interests of the people they claim to represent? The short answer is that if they draw attention to this blatant discrimination it is they who will be accused of racism! This is Wales 2012. 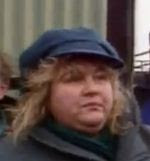 A comment to the original blog gave this link to a remarkable piece of film. Click to start, tick the box ‘Ydw’ then click ‘Iawn’ and go to 12:30 into the film where you’ll encounter this bitch. (Left.) Now I am totally opposed to wind turbines, but there is something to be said for them if they encourage people like this creature to move back to where they belong.
Comments to this post, and indeed all my posts, say we need a new political party. An uncompromisingly nationalist party. I’m not so sure. When intolerant harridans like her stalk our land, when discrimination is rampant, when we are pushed around and spat on but no one speaks out, something more is needed.
Because we are dealing with people, both individuals and organisations, that have no respect for us, and simply want to take over our country, being ‘reasonable’ should no longer be an option.

UPDATE 07.11.12 The link provided in the earlier update has been changed by S4C, or someone else. How very odd.

One thought on “Loyalty Betrayed”