I suppose we all knew it was coming, but the announcement still left a bad taste in the mouth. I’m talking about the UK government’s plans to exploit the centenary commemorations for World War One in order to influence the Scottish independence referendum in 2014. I even joked about it here a few weeks ago. Well, now PM Cameron has confirmed my fears by firing the first salvo, with his announcement that £50m is to be given to a “historic” commemoration.

The BBC story I’ve linked to exposes the exploitation we can expect perfectly. First, it says that a survey claims 69% of people want Remembrance Day 2014 to be “a special national day”; but then quotes David Cameron talking about “commemorations”, and saying that the National Lottery is looking for “more applications for WWI-themed ideas”, and that £5.3m is being given to pay for English schoolchildren to visit WWI battlefields. So using the justification that a majority wants a single day, November 11th 2014, to be a bit special, the UK government intends going overboard with a whole series of events . . . that will, by happy coincidence, link with the Scottish independence referendum. 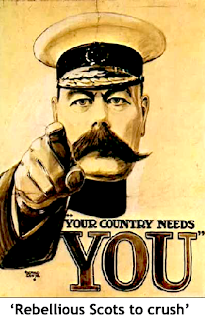 That referendum is planned for the autumn of 2014, the date has yet to be fixed. But ‘autumn’ means September, October and November. So what could be ‘celebrated’? June 28th marks the anniversary of the assassination in Sarajevo that started it all. No real British interest, but it will have to be marked somehow. August 1 saw Germany declare war on Russia and Serbia. Again, no real British interest other than the involvement of other branches of ‘the firm’. August 3, Germany declares war on France. Getting closer now! August 4, Britain declares war on Germany. Now it really starts.

One problem for the UK government is that the fighting of 1914 on the Western Front involved mainly French and Belgian troops facing the German onslaught, with Britain’s contribution limited to the small regular army and reserves. (Conscription wasn’t introduced until 1916.) By the end of 1914 this regular army had almost ceased to exist, but it had served its purpose in doing enough to help halt the German advance and save Paris. Perhaps the major battle in this period was the first Ypres (‘Wipers’) where, of a combined Allied strength of 4.4 million men, the British army supplied just 164,000. (There were 247,000 Belgian soldiers.)

Which presents Cameron with a problem. For if he does go overboard celebrating the British army’s contribution in 1914 he risks being reminded by the French and the Belgians of just who did most of the fighting. In addition, by celebrating the killing of Germans (which is what it amounts to) he runs the risk of antagonising what, a century on, is still the most powerful country in Europe. And all being done to keep the English empire in one piece! But why celebrate it anyway?

I’m no pacifist but the First World War makes me angry for so many reasons. Mainly because it was so bloody unnecessary. There were no great issues at stake. A Serb nationalist killed an Austrian Archduke in a territory the Serbs wanted to take over; which led, within months, to the great powers of Europe mobilising tens of millions of men for no better reason than they were locked into various alliances. Germany with Austria; Russian with Serbia; France and the UK with Russia; etc., etc. Resulting in millions of men dying for nothing; communism getting the kick-start it needed; Europe ending up in hock to the USA; and the ‘settlement’ at the end of it all guaranteeing the rise of Nazism. What the hell is there to celebrate! The only thing to be thankful for is that – largely due to trench warfare – there were so few civilian casualties.

No doubt these ‘celebrations’ being planned by our Old Etonian government will make use of the poets, particularly Rupert Brooke and others of a ‘foreign field’ bent. To which I would answer, Bollocks! Instead make the greatest anti-war novel ever written compulsory reading in schools. No, I am not referring to All Quiet on the Western Front, which I love; but Jaroslav Hasek’s masterpiece, The Good Soldier Svejk. The thing is, you see, Svejk is an idiot (with the papers to prove it), but devious with it. Before being called up to avenge the Sarajevo assassination – and become ‘the only loyal Czech in the Austrian army’ – he made his living touring the streets of Prague picking up stray mutts, which he then clipped and painted, and in other ways ‘modified’, before selling them on to unsuspecting buyers as rare pedigree dogs. The war that Svejk lives through is an absolute, and literal, bloody shambles. Anyone looking for glory and honour will be badly disappointed. And yet, you can’t help liking him; perhaps because if there’d been a few dozen Svejks in each army the whole war would have ground to a standstill. The (unfinished) book ends, predictably perhaps, with Svejk, wearing a Russian uniform, being captured by his own side. Though I suppose nobody’s really sure which side he’s on, if anybody’s.

Returning to the survey I mentioned earlier, the one that found 69% want Remembrance Day 2014 to be a bit special; well, the poll was conducted by YouGov, on behalf of an organisation called British Future. Which, as far as I can make out, promotes an integrated, unified Britain; perhaps as part of a wider strategy to take the issue of immigration away from the Right and the extreme Right. The Director, Sunder Katwala, is a Fabian and a writer for the Observer. So what we seem to have here is the Unionist soft Left. Very English, very putting-the-world-to-rights-over-an-agreeable-Merlot sort of outfit. And when push comes to shove, very English and unashamedly nationalistic. Because Fabians and writers for the Observer would not normally want to ‘glorify war’ – so what’s different about 2014? British Future’s concern with Remembrance Day 2014 is, like Cameron’s, tied up with the Scottish independence referendum. Katwala spells it out here, or rather, he did to a fringe meeting at the Conservative Party conference. (Fabians and Observer hacks wouldn’t normally be seen dead at Tory conferences either!) Which proves yet again that when it comes to dealing with the Celts the English sink their ideological differences in order to hang on to their discredited little empire. (But take heart! For Katwala’s piece celebrates 1914, but the accompanying map shows the Irish Free State, which didn’t come into existence until 1922! Tut, tut.)

Before today I’d never heard of British Future. So I’m wondering how many more organisations there are like this. How much money, public and private, is available to these groups pushing their English-rule agendas? How dirty is it going to get? It seems that with two years to go to the referendum the gloves are already coming off. So from now on we Welsh must do anything we can to aid the Scottish campaign for independence. Partly because it is the right thing to do for Scotland. Partly because even if there were no referendum it would still be right to challenge organisations like English Future. And, finally, because it is the right thing to do for Wales.