I am indebted to an anonymous contributor to my previous post who drew my attention to a reply by Jonathan Edwards MP to a tweet by Owen Jones, the columnist and author of Chavs. These two are agreed on the socialist interpretation of WWI which says the ruling classes sent millions of men off to die for no good reason other than the propagation of their corrupt and decrepit systems. Which is right only up to a point.

Implicit in that interpretation is that these minions were forced to fight, or marched off reluctantly. Both of which are untrue. Disillusionment may have set in later, but the declarations of war were received with wild celebrations in the streets of Berlin, Belgrade, St. Petersburg, Paris, London and countless provincial cities. Those cheering belonged to all classes; for the First World War was a war of nations and nationalisms, old and new. You can argue that the ordinary soldiers had been brainwashed, or got carried along with the euphoria, but you cannot argue they were forced to fight.

The specific criticism made is that Jonathan Edwards is merely following the English Left’s interpretation of the Great War, when we have every right to expect from him, and from other Plaid politicians, a Welsh nationalist “narrative”. In other words, Welsh soldiers dying needlessly for the English empire in a pointless and bloody continental conflict against peoples with whom we Welsh had no quarrel. With which I agree totally; but this Twitter exchange exposes a deeper problem with Plaid Cymru and ‘Welsh’ socialists generally, which I shall return to later. For the time being let us focus on one of the few pluses to come out of World War One.

This was the emergence of new States, homes for small nations previously submerged under the Russian, Austro-Hungarian and Ottoman empires. Nations such as Finns, Czechs, Lithuanians, Romanians, Poles and others. (Ireland can not be included in this group because the empire to which it belonged did not fall; even if it was WWI that encouraged the Easter Rising which ultimately led to the creation of the Irish Free State.) This truth attracts a special irony to Cameron’s attempts to use the World War One commemoration to help him thwart Scottish independence.

Small nations sneaking out from between the cracks, with their ‘revisionist’ and bourgeois interpretations of the past is anathema to English, French, German and Russian socialists. As is the fact that many of the submerged nationalities chose not to set up a workers paradise but a nice little bourgeois-capitalist State of their own. In fact, the greatest resistance to the war came not from the beloved proletariat of the major States but from the small nations reluctantly part of States and empires that were enthusiastically gearing up for the blood-fest (and that included their working classes). The coal miner in Silesia or the student in Bohemia viewed the conflict in a totally different way to their counterparts in Yorkshire and Bavaria.

The commenter also mentions Plaid’s response to the unionjackery of this past summer, or as he / she put it: “Look, the Brits have seen how there was no organised campaign against the Butcher’s Apron being flown across Wales. Plaid played the ‘sensible’ politicians, ‘let it be, it’ll go away’ . . . and what’s happened? The Brits have gone ahead and are now piling on MORE Brit Fest and curtailing the Assembly’s powers. Hmm, that sophisticated argument worked very well didn’t it?” This, I would suggest, is part of Plaid’s long-running attempt to be seen as a ‘reasonable’ and ‘responsible’ party. The objective of which is to be an acceptable dogsbody for Labour. What the anonymous commenter and I agree on is that Plaid Cymru is primarily a socialist party. A British, regionalist, socialist party . . . when what Wales needs is a nationalist party.

The problem with being a party that is both socialist and regionalist is that the socialism invariably dominates. Plaid Cymru has proven this many times over the past thirty or forty years. We have seen the party pursuing socialist policies that are inimical to Wales’ interests. A perfect example would be Plaid Cymru’s support for social housing for anyone ‘in need’ whether or not they even live in Wales. Which results in indigents and undesirables being brought to Wales – and this being paid for out of an already overstretched Welsh budget. And of course it too often leads to Plaid politicians falling into line with English socialists, even when these are hostile to Welsh interests! So to answer the point made by the commenter; in the recent orgies of unionjackery Plaid has certainly not adopted a nationalist position; but neither has Plaid adopted a socialist position; Plaid has simply adopted the coward’s position . . . which always results in further bullying.

One of the major problems I find with socialism is that it is anti-national. Or rather, when espoused by members of large nations, or members of the majority group in multi-national States – whether Russian, Castilian, English, Han – socialism nearly always promotes the idea that ‘big is beautiful’, that unity, even bland uniformity, are to be cherished; and that minorities seeking to break away are invariably following some deplorably atavistic impulse that higher forms of political life – such as unionist-socialists – have long outgrown. This does not apply to our patriotic Welsh socialists of course – heaven forfend! – but they are so happy in the company of other socialists in Wales – the non-Welsh and the anti-Welsh – that some of this ‘primitive nationalism’ interpretation invariably rubs off onto them. (Which of course explains Plaid Cymru’s deviant behaviour in recent decades.) 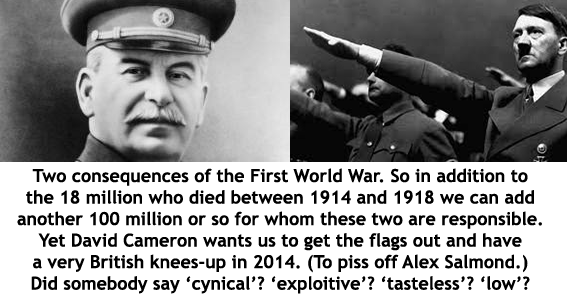 So while we need to oppose the British imperialist interpretation of 1914, we must also reject the socialist narrative, which has an unwilling proletariat sent off to war by megalomanic kings and emperors or an uncaring capitalist system. For this is not an alternative, it’s simply a variant British unionist interpretation. (Which explains how the ‘All in it together’ mantra serves both.) Instead we need to argue that Europe sacrificing the cream of her manhood for no good reason ranks as one of the greatest crimes against humanity ever committed. Consequently, to ‘celebrate’ this, especially for cheap, political advantage, would be insulting to all those who died. Remembering that World War One led to Stalin and Hitler, anything other than profound apologies from the States (and their successors) that went to war in 1914 would demean the memories of those who died between 1914 and 1918, and also the tens of millions more who died in World War Two, and those who perished in the gulags and the concentration camps.