This is a story I am familiar with, having met Pol Wong a number of times and having him patiently explain to me the tortuous process he’s been through. Without wishing to pre-empt any inquiry there are a few points to be made and a huge question to be asked.

Pol’s idea is magnificent. With the Shaolin connection it could only increase Llangollen’s internationalist credentials. But Pol also wanted to take disaffected kids off the streets and give them self-respect and a purpose in life. A third strand was the promotion of Welsh culture. For Pol is a proud Welshman and a Welsh speaker. 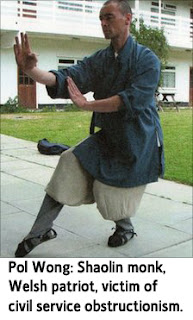 Everything was going fine with this project; the funding was in place, as was planning consent, and political approval had also been received. If memory serves me right, the project was signed off by both Rhodri Morgan and Ieuan Wyn Jones. Then silence, and problems. Possibly instigated by the previous Labour AM for the area Karen Sinclair, who seemed to have developed a pathological hatred for the project. But she could have done nothing without the help she received in Cardiff. I suspect she merely served to alert those on the look-out for dangerous Welsh initiatives.

More than once I have condemned the behaviour of civil servants in Wales, such as those belonging to the shadowy and sinister Housing Directorate. It was the obstructionism of civil servants like these that seems to have derailed the Llangollen venture. Not by communication but by silence. I say that because, from talking with Pol, I know that one of his biggest frustrations was the total lack of feedback and answers, of not knowing where his project stood. Repeated letters, phone calls and e-mails went unanswered. It was as if the project had disappeared into a black hole.

There is no doubt that this project has been scuppered by civil servants in Cardiff. That’s bad enough, but worse is the sense that our politicians are helpless in the face of these people. So the big question I referred to at the top is this: Who runs Wales? Is it the politicians we elect to the Assembly or is it unelected civil servants accountable to no one but their masters in London?

The evidence accumulates that it’s the latter, and this makes a mockery of devolution.

UPDATE: 19:50 Since posting I have been e-mailed by Pol Wong who says: “WAG’s insistence that we failed to get funding is a lie. A package was presented to Ieuan Wyn Jones in Jan 2010, which he ok’d. The permanent secretary (after a call from Karen Sincclair) insisted that another more detailed paper was done, which it was. She then prevented it going back to IWJ for the decision.

Of course during this period it was impossible to get funding from other sources because WAG would not talk to us to confirm or otherwise vital info for funders, even at one point instructing security not to allow a site meeting for our potential new funders!
Basically we say that YES we did have funding but the Permanent Secretary overruled it and then they actively prevented us from getting funding from any other source.
So in the end after 2 years the election came and hey presto new (Edwina Hart) minister, then the refusal to back it because we no longer fit with policy, even though they have a commitment to tourism. They get around this by saying that they fail to understand how we support tourism!”
In a subsequent e-mail Pol told me: “Also, I’ve got loads of stuff from FOIs and a transcription of a meeting with Karen Sinclair (AM) where she brags to me that, ‘I phoned Gill Morgan (Permanent Secretary) and that’s why your money was stopped’! Plus loads of other stuff that backs up my assertions”.
This whole business stinks and a public inquiry is the only way to get to the bottom of it.
Share this...