After watching the second programme in the series, Swansea: Living on the Streets, last night, I have some more observations. But before making these, I want to address some sanctimonious Brit Left ‘anti-racist’ comments made on the earlier post.
What I’m attacking here (and in many other blogs) is the waste of public funding in Wales; the way that money always seems to be available for non-Welsh issues; and the fact that by throwing money at a problem – as in the case of turning Swansea into the homelessness capital of Wales – you only make that problem worse. I am attacking the third sector and those politicians who support it. There was nothing racist in my attacks on AWEMA and there is nothing racist here. ‘Racism’ seems to be the last resort of anti-Welsh Unionists who’ve got no argument.
In the earlier post I neglected to mention some other organisations active in Swansea. Prominent among them is Caer Las; an organisation I have previously posted about due to its activities in Llanelli. Also worth mentioning is the Wallich Foundation, very active in homelessness projects around Swansea Bay. Add these to Shelter Cymru, The Cyrenians, the many housing associations and other groups dealt with in my previous post, and you have what can only be described as a homelessness industry in Swansea. All reliant on government funding and public and private donations, which are drying up in these straitened economic times; so this series is – with the connivance of the BBC – nothing but an appeal by the Swansea homelessness industry for continued or increased funding. 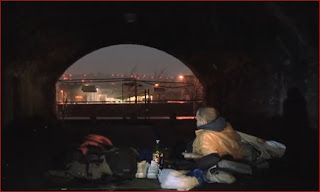 Having mentioned Caer Las, this links with another recent post on the mystery of why Wales is the only country of the UK without legislation on Houses of Multiple Occupation (HMO). With the result that in Wales it is possible to convert a residential dwelling into a multi-occupancy building (with up to 7 tenants) without needing planning permission and with no requirement to inform neighbours. Swansea – surprise! surprise! – has one of the highest incidences of HMOs in the UK. The more you learn about how Wales is misgovered the more you can make sense of things that you might otherwise pay no attention to. The Welsh Government refuses to implement HMO legislation because it would impede the colonisation work of the homelessness industry, private landlords, social housing agencies, universities and others.
Moving on, a criticism levelled against my previous post was that I was a bit harsh in my descriptions of some of the homeless. So consider this. Those being paraded before the cameras are the best of the bunch, the ones designed to elicit our sympathy. We aren’t being shown the aggressive beggars, the drunks and junkies sprawled out in public places, the used needles, the urine and the excrement, etc., etc. The BBC is not screening footage of gangs of drunken, screaming dossers wandering the city’s streets. No, it’s all very, very selective, because it’s all about securing funding.
Swansea has a homeless industry providing many hundreds of jobs; the ‘raw materials’ of this industry are down-and-outs. It follows that – as in any industry – there must be a regular supply of raw materials. To guarantee the continuing success of this industry Swansea must attract people with no connection with the city, or Wales, simply to keep the industry going. There can be no doubt that the industry has been successful. One of those interviewed in last night’s programme was a Mancunian who had travelled to Swansea from Bristol. This man – who, rather worryingly, described himself as “feral” – stated that he had “heard good things about Swansea” and this explained his coming. What he probably heard was that Swansea is a soft touch.
The fact that Swansea is Wales’ homelessness capital is due solely to the money and resources being thrown at the ‘problem’. It follows that if you throw more money at the problem it will grow, by attracting yet more dossers to the city. Then the self-serving people who run some of these organisations, and pay themselves such generous salaries (and pension packages), will use the growing problem to argue for yet more funding.
When are politicians and others going to wise up to the reality that many of these third sector ventures are nothing more than black holes for public funding? You will only reduce the problem of ‘homelessness’ in Swansea by cutting the funding and making the city less attractive to dossers.

It may not be AWEMA, but homelessness is another form of deception, and it saddens me that it’s happening in my home town. But this problem, this waste of money, is not confined to Swansea. Across Wales money is being poured into third sector ventures providing no benefits whatever to Welsh people. Why are we wasting this money? Why does Wales have no HMO legislation? Why is it often easier for a Londoner to secure social housing in Wales than a Welsh person?