We have endured political correctness (PC) for almost 50 years. I suppose it can be traced back to the Civil Rights movement in the USA and the search for new words for negro and other terms that could have previously been used quite inoffensively. And while its use might have been justified in the context of US race relations, it soon spread to become a liberal-socialist weapon for limiting freedom of speech; done by re-defining the paradigms and limits of acceptable debate, even the very words that can and cannot be used, in a way that puts those who do not accept the liberal-socialist consensus at a disadvantage. Not so long ago it seemed that PC had won a total victory but now, thankfully, it is in retreat. This has come about due to a growing realisation that PC at its worst is about more than just words and sensitivities. At its worst it encourages denial of the truth.

For example, I recall a year or two back, a programme on BBC on a Sunday night, one of those documentary series the Beeb thinks it does so well. This one was about human evolution, a subject where we have seen the influence of political correctness rampant. For the accepted, PC, theory is that we are all descended from small groups that left Africa within the past 100,000 years . . . trouble is, the facts don’t add up. Small groups leaving Africa in relatively recent times can not account for either the racial variations or the sheer numbers of humans found in the world today. Something else must be at play.

Not so long ago ‘Neanderthal’ was a synonym for a brutal, beetle-browed sub-human, little more advanced than an ape and, of course, being so distant from ‘modern humans’ (homo sapiens) as to have made inter-breeding impossible. Then the PC ‘theory’ began to unravel. The toys of Neanderthal children were discovered; it was realised that this ‘primitive’ species placed flowers on the graves of their dead; and eventually it was conceded that modern Europeans do have Neanderthal blood in their veins. How much exactly, is still being debated, but I predict the percentage will gradually rise.

Against my better judgement I watched the whole series, parts of which were quite funny. Not least when the crew reached China, because the Chinese don’t buy into the ‘Out of Africa’ scenario. They believe they are descended from a completely different line of human evolution, one that took place outside of Africa. This was difficult for the politically correct BBC. They could have gone to town on a bunch of Alabama rednecks, but non-European academics posed an altogether different problem. So, in the most polite way possible, it was suggested that the Chinese were mistaken. 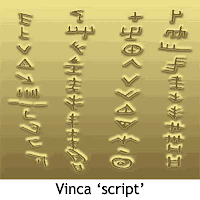 Recently I learnt that writing may have developed not in Mesopotamia, as we have always been taught – Sumerians and all that – but in the Balkans. If the theory now gaining adherents is correct, then the so-called ‘Vinca culture‘, and what is claimed as its associated script, pre-dates the earliest writing found in Mesopotamia by some 2,000 years. This remarkably advanced civilisation has apparently been known about for almost a century, so how is that I, who takes a keen interest in history, knew nothing about this early European civilisation? The answer may lie in the fact that it is European. For there is a strenuous rearguard action being fought by those that wish to maintain the reputation of the Middle East as the ‘Cradle of Civilisation’. These are not all Arab or Islamic scholars either. Many are Westerners. This I can accept if their opposition to the new thinking is based on academic grounds, but I suspect that – as with the refusal to accept Neanderthal-modern human inter-breeding – political correctness plays its part. For I guarantee that had this ancient civilisation been unearthed in the Americas, or Asia, or certainly in Africa, then the BBC would have sent Michael Wood and a regiment of its tele-‘historians’ racing to the location.

Because that’s the thing with political correctness, it’s a Western phenomenon, yet in its application it is so often anti-Western. While within the West it is often used selectively against groups that don’t conform to the prevailing political dogmas or social mores . . . such as Welsh nationalists.

My time in nationalist politics has coincided almost perfectly with the era of political correctness, and I have learnt this. The biggest threat to the progress of this nation is not the usual ogres – the Tories, the Freemasons, the Daily Mail, Daily Telegraph, etc., etc., though these will all provide opposition. (And I shall continue to poke fun at the golf club set and the rest because I just can’t resist it!) No, the biggest threat comes from the ‘soft’ Left, the ‘sensible centre’, the Guardianistas, and others who will sound ever so interested in what you have to say. That’s because as long as you’re just harmlessly airing grievances they can treat you in the patronising way they would any other exotic minority . . . but will react as if you were the aforementioned Alabama rednecks if you ever get serious about Wales and Welsh independence.

With the traditional English Right you know where you stand, it’s us or them, and historically they usually respect nations that stand up for themselves. But the English liberal Left is never to be trusted. In whatever guise it comes, be it BBC or Guardian, Green Party or Common Purpose, CND or Fabians, it is duplicitous and English to the core. All aided by its near-religious adherence to political correctness, that way of disguising lies and denying truth that could have been taken from 1984. So beware of these smiling, ever-so-reasonable, dissemblers; the people Plaid Cymru is so embarrassingly desperate to impress.