Two current stories provide further evidence of the mess local government is in in Wales.

The first is the ongoing saga of the totalitarian regime on Goal Hill in Carmarthen. For some time now the dictatorial chief executive, Mark James, and his underlings, Meryl Gravell, Leader of the Independent councillors (in many cases, Tory), and Labour group leader, Kevin Madge, have run the county without reference to the majority of those elected by the county’s voters. Carmarthenshire is now a democracy in name only. So bad have things become that the county’s largest town is talking of secession.

This slide into darkness has resulted in a totalitarian approach from county hall towards anyone daring to criticise the troika, while the council funds James’ personal libel proceedings and outsources services to – and also funds – a bunch of religious extremists. Thankfully, the fightback is underway. One of the local ‘papers having joined the Resistance this week. 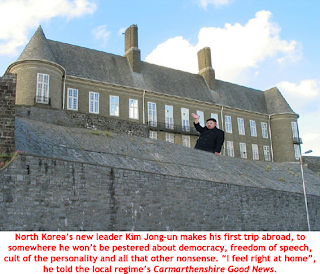 The other example comes from Caerffili, where a small group of councillors secretly agreed with the chief executive, Anthony O’Sullivan, that his salary, and the salaries of other senior officers, should be greatly increased . . . soon after telling the lower orders that there was no cash to give them an increase. As I write this it seems the plebs are considering strike action.

As in Carmarthenshire, we see censorship in Caerffili, according to Unison Cymru branch secretary, Gary Enright (where’s Larkin?): “Unison members have expressed concerns, however, that since we have started to publicly speak out and campaign about the pay rise the chief officers have received, access to news websites, including Wales Online, appear to have been blocked by the council’s IT systems”.

Throw in the Welsh Government sending up Commissioners to run Ynys Môn after losing patience with its dysfunctional council, and it becomes clear that local government in Wales has a number of problems. Brought home to me again last year, during the Assembly elections. The chief returning officer for the north, Mohammed Mehmet, decided unilaterally to hold the north Wales count the day after the election. So results for the rest of Wales were already known before the counting even started in the north. Mehmet is chief executive of Denbighshire council. So, for me, one of those problems is that of over-powerful chief executives, none of whom seem to be Welsh.

It would be nice to think that the Welsh Government is giving these despots enough rope to hang themselves, but that’s unlikely. Even so, everyone knows that at some time in the not-too-distant future the Welsh Government is going to have to grapple with local government re-organisation to give us far fewer councils than the 22 we know today. This offers opportunities for reform that must be grasped – or do we simply want the likes of those above wielding untrammelled power over even larger fiefdoms!

Of course not. So for a start, not only should we have fewer councils, we should have far fewer councillors. (The cabinet system has rendered most councillors redundant anyway.) It is painfully obvious that we can’t find enough people of even the limited ability required by the 60-Member talking-shop in Cardiff docks, so why do we delude ourselves that we can find a few thousand councillors who can simultaneously chew gum and tie their shoelaces without choking or getting their finger trapped? (Possibly both.)

So let’s have a small number of professional councillors in each of the new councils, paid a decent wage with a car thrown in. For bear in mind that New York city council, serving the five boroughs, 8 million people, and countless racial and ethnic groups, has just 51 council members. So how the hell can anyone justify 73 councillors in Powys, with a population of 133,000? Also, abolish the cabinet system. Make all meetings open to the public. Let members of the public record and film all meetings. After all, councillors work for the public.

Let’s not stop there, let’s be really reactionary, and remind chief executives and other top managers that that’s all they are – managers. They answer to the councillors we elect. In other words, they work for us, the people living in the area covered by their employer. It would help, I’m sure, if the new authorities employed Welsh people for the top posts; because these would not only know the area better they would also empathise more with those they served, and be much less likely to act as gauleiters or colonial governors. Perhaps in the fullness of time the required legislation can be passed.

In the meantime, we are stuck in this world turned upside down in which an individual who should be serving the council is in fact running it! While most of those we elect are rendered impotent, and might as well not bother going to council meetings because everything is stitched up in advance between the unelected de facto leader and whoever, nominally, heads the cabinet. This is not democracy. Only a party used to doing things in such a manner could accept it as democracy, and allow it to persist.