The Wales Audit Office (WAO) has produced its report into the calamity known as AWEMA, or the Malik family business, that swallowed up £7.15m of public funding. Here is the BBC website account of the saga, together with a contribution from the Assistant Auditor General, Anthony Barrett. The WalesOnline account can be found here. 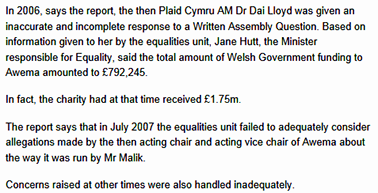 Both accounts agree the WAO has dismissed allegations of political interference, or protection, that had been made due to the Malik family’s links with the Labour Party. So I hope this now puts the matter to rest. I don’t expect anyone to make this scurrilous suggestion again. Moving on . . . An interesting reference in the WalesOnline account (absent from the BBC version) was to the “equalities unit”. Using the search engine on the Welsh Government website I could only find references to the ‘Welsh Local Government Association’s Equalities Unit’ in reports such as this.

From which it would appear that the Equalities Unit is an arm of the (Labour Party controlled WLGA) yet funded by the Welsh Government, to do . . . what exactly? Well, one of its roles appears to be informing, or, in the case of Jane Hutt, misinforming, Welsh Government Ministers. This strikes me as a bloody odd set-up, what do readers think?

Whatever the arrangement, the Equalities Unit seems to be answerable to, or otherwise connected with, Jane Hutt, the bubbly and vivacious Minister for Finance. Staying on the Welsh Government website I poked around (as is my wont) to see what else I could turn up. This (left) was one of the first rib-ticklers. It talks of bisexual people as if they have a problem. I have bisexual friends who would find that funny. Possibly insulting. And how many transgender people are there in Wales? But look at the wording – “large gaps in the equalities evidence base . . . prioritise the filling of those gaps . . .”. In other words, Look for a ‘problem’ to keep the funding flowing. 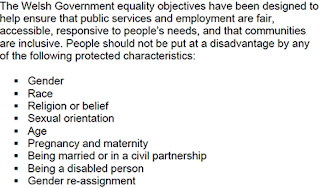 Elsewhere I found other gems. Such as this load of old bollocks (right) which seems to suggest that gender, religion, age, even being married, are further ‘problems’ that can only be solved by big dollops of lucre to those in the Equalities Unit . . . for how else are they to fill the gaps in the equalities evidence base? Human nature being what it is I can understand the shysters of the Third Sector trying it on with nonsense like this. What I can not understand is politicians accepting and funding this deception. Still wondering I moved on and encountered another vein of politically correct enlightenment. 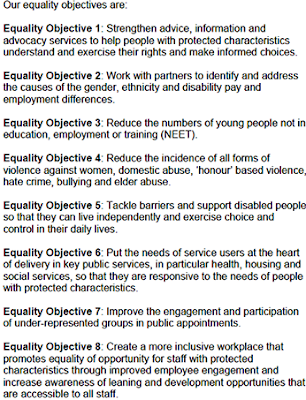 Take Objective 1. What the hell are “protected characteristics”? I’ve got a big nose – can I get it protected? Will the Equalities Unit take up my case? Objective 6 is an absolute – though doubtless unappreciated – insult. The ‘needs’ being prioritised are in reality those of the people producing this rubbish, those who have created an industry out of identifying and capitalising on ‘differences’ that most of those with these ‘differences’ did not realise qualified as ‘protected characteristics’ – and could therefore be exploited – until told by those who had built up a cottage industry of identifying these ‘problems’ – and all sustained with public funding. The prize though must go to Objective 3. We all want to see fewer youngsters – NEETs (Not in Employment, Education or Training) – doing absolutely nothing. But the way to do it is not by pumping money into the Third Sector to rent some place, then fill it with pool tables and computer games to keep these kids off the streets, but by creating real jobs for them to do! But then, that would remove part of the the justification for funding the Equalities Unit. Giving the Equalities Unit, and similar Third Sector leeches, a vested interest in undermining the creation of genuine employment. Funny old world innit!

Obviously I haven’t yet read the WAO report, but one thing I found worrying in both the press reports I’ve used here is that neither mentioned the source of the money squandered on AWEMA. Anyone reading these reports might therefore conclude that the funding came from the Welsh Government, probably from the block grant received from London. Wrong. The bulk of the funding given to the Malik family came from the EU. As is shown by the clip (below) taken from the Wales European Funding Office (WEFO) website. The clip is dated February this year, when WEFO stopped funding AWEMA.

So the Wales Audit Office report might not close the book on AWEMA after all. For if I was working for the EU, in say, regional funding, then I might start taking an interest in how the money we had given to Wales to create jobs had been wasted. Obviously the money created and sustained jobs for the Maliks, but I think the EU would have expected more. And this becomes more important seeing as next year we are to be surveyed again in order to prove that we are now poorer than Slovakia, and so qualify for another tranche of top-whack funding. Not all of Wales, obviously . . . just those areas that voted Yes in the 1997 devolution referendum.

And who knows, maybe some continental cynic who doesn’t need to show respect to the Labour Party might conclude that the comrades do not emerge blameless from this scandal. Anyone wishing to ensure that the facts reach the right man should write to Johannes Hahn the Commissioner responsible for Regional Funding. I have.

In conclusion, let me assure you that I am not the callous, reactionary, sexist, bastard some would paint me. But surely, the Third Sector is now ready for scrapping; with the money saved used to provide real jobs. Because this ‘equalities’ racket is nothing more than people making a publicly-funded career out of their skin colour, their religion, their sexuality . . . or exploiting these “protected characteristics” when they appear in others. I mean, just think . . . if Naz had gone for “gender re-assignment” he could have ticked yet another box. And made himself almost untouchable!

3 thoughts on “Naz Malik, AWEMA: Not Over Yet?”