Now that we’ve all had time to think about it, what should be the patriotic Welsh response to the wedding of William Windsor and Kate Middleton? For although we would like it to be otherwise, in the eyes of the world there are strong Welsh connections. 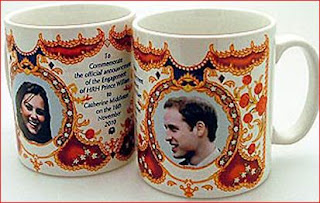 To begin with, William is the son of Charles, referred to by those who know no better as the “Prince of Wales”. In time, if he ascends the English throne, Charles might hand over that silly title to William. Then there’s the matter of William serving in granny’s air force and, more importantly for us, being based on Ynys Môn. Finally, due to the toadies at the Welsh Rugby Union, he is a patron or some such of that sport.

So to pretend that this is an entirely English affair is simply not an option. Nor is ignoring the whole circus an acceptable approach because those who ignore it are liable to be themselves ignored. Or, perhaps, knowing how our enemies interpret these things, all those ignoring the event will be regarded as being ‘shy’ or closet royalists, just as all those who did not vote in the 1997 referendum were virulently hostile to devolution.

Which leaves us no realistic alternative but to organise counter events on the day of the wedding. While we might not be able to compete in numbers with those who use any excuse for a street party and a skinful we can certainly compensate in quality for any shortfall in numbers. For our gatherings will be attended by those who have made up their minds to swim against the tide of hysteria and crude politicking that will begin soon after Christmas.

Let’s get started. Let’s set ourselves an initial target of ten or a dozen family events around the country where people can enjoy a day of being Welsh, a day of dignified refusal to sanction or support yet another expensive royal extravaganza. Not only will we feel better for organising such a day, but it might have long term benefits for the nation.

UPDATE: So now we know that the wedding will take place on Friday, April 29 and it will be a public holiday in Englandandwales. (Though not in Scotland where, interestingly, the decision rests with the Scottish parliament.)
William’s family will be paying for the wedding(!) but the State – i.e. you and I – will pay for security, transportation, etc. In other words, a near bankrupt country will pay tens of millions of pounds in the hope of generating a feelgood factor, while also encouraging a sense of British political unity and social cohesion.
One of our targets must be to ensure that the neither the Notional Assembly nor our local authorities wastes a penny on this circus designed to promote English hegemony within the framework of British cultural and political unity.