Following my earlier posting about the problems being experienced by Llanelli residents due to the activities of Caer Las, a registered charity based in Swansea, I have received a comment from Andrew Templeton, a representative of that body.
In his rather bland and formulaic response Mr. Templeton at least had the honesty to confirm that Caer Las deals with “persistent offenders” i.e. criminals. It’s a pity that this honesty is not shown or reflected on the Caer Las website, which talks only of the homeless, people with learning difficulties, and others who might be termed ‘unfortunates’ or ‘victims’. Which suggests a certain dishonesty, and perhaps deviousness in the way it has attempted to place such people in residential areas of Llanelli without the knowledge of the people in those areas or their councillors.
Mr Templeton also states that all those being housed in Llanelli have local connections, and that none are being brought in from over the border. This is not what I hear from those living in the afflicted areas. Though, not surprisingly, this is the same kind of blanket denial also used by Welsh housing associations – ‘Everybody we house is local’.
As Nick Bennett, chief executive of Community Housing Cymru (the umbrella organisation for Welsh housing associations), stated in an e-mail to me earlier this year after I had suggested that Welsh housing associations house far too many people from outside Wales: ” . . . this is a perennial chestnut. It was once raised by Neath Port Talbot and all the Associations analysed all lettings during the year and found no-one who had come from England. Usually what has happened is locals have returned home, or someone has moved into the private rented sector, lived there for a few years and then got on the waiting list.”
So there you have it: ” . . . all the associations . . . all the lettings . . . no-one who had come from England.” The word I used then to describe this response was “bollocks”; because it is insulting to people living in the kind of tight-knit communities that make up Neath and Port Talbot to suggest that total strangers, speaking with English accents, are all local.
The same, I suggest, applies to Caer Las, which obviously has links with the Probation Service for Englandandwales. Which raises another interesting point. For a tried and tested method of getting criminals to go straight is to take them away from their old haunts and their criminal associates. But it seems this widely practised method does not apply in Llanelli. For if Mr. Templeton is telling the truth then Llanelli recidivists are brought home to re-acquaint themselves with the cronies, the influences, the milieu, that got them into trouble in the first place!

Anyone going to my earlier blog about Caer Las and Llanelli will be disappointed if they to try to follow the link to the blog of Jim Bird-Waddington, the Caer Las hetman. All they’ll get is the message, ‘Blog has been removed’. But you aren’t missing much. The ‘full profile’ said nothing and the postings gained no comments . . . well, apart from me. I do hope I wasn’t – even in part – responsible for this blog biting the dust. I’d never forgive myself!
From everything I’m learning it is becoming clear that elements of the so-called ‘third sector’ are doing great damage in Wales. In pursuit of money – and remember, this is supposed to be ‘the voluntary sector’! – housing associations, the Probation Service (for Englandandwales) and organisations like Caer Las are prepared to bring into Wales undesirables and foist them on Welsh communities. Politicians may fall for their lies but people who have to live with the problems do not. Nor do I. So I shall continue to expose these people and the damage they do.

More on the dumping of criminals and others in Llanelli. Someone sent me cuttings from a recent issue of the weekly Llanelli Star, which I reproduce here. (Click to enlarge.) Reading these cuttings raises yet more questions. 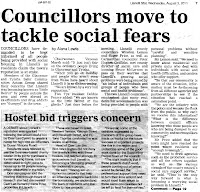 How would people “outside the area and even abroad” know that Llanelli was being used as a dumping ground for these people, as is alleged by locals? Who exactly are Caer Las Cymru (CLC), the main agency involved? For according to the blog of their head honcho, Jim Bird-Waddington, CLC has been in existence for over 30 years but “like many third sector organisations we have undergone many incarnations and experienced a great deal of change”. So what was this outfit formerly known as, and where was it based? I ask because according to its website CLC only operates in Wales, so why include ‘Cymru’ in the name? This is almost always done by English organisations hoping to put on a Welsh veneer. For example; National Trust Cymru, RSPB Cymru, RSPCA Cymru, etc., etc.

There is clearly a problem in Llanelli that is slowly being brought into the public domain. What appears to have happened up until now is that these bodies wishing to bring in drug addicts, criminals and others, have enjoyed a rather cosy relationship with the officers of Carmarthenshire County Council – yet the people living in the affected areas, and their elected councillors, have been kept in the dark! Were members of the Labour-Independent coalition running the Authority informed? If they were, then why wasn’t this information passed on to the people in the affected areas and their councillors? If the coalition councillors were not informed then are we to assume that Carmarthenshire is being run entirely by its officers, in contempt of both democracy and those they are paid to serve?

Another possibility is that the ruling coalition knows what’s happening because it took a decision to dump these people in wards that had the temerity to elect non-coalition councillors. This sort of thing happens; and given the petty, vindictive tribalism of the Labour Party in Wales it would not surprise me one bit.

Whether or not it’s the Labour Party at fault, one thing is for sure. The evidence is mounting from all corners of the country that Wales is being used as a dumping ground by housing associations, the Probation Service (for Englandandwales) and other bodies that may be based in Wales (even registered with the Welsh Government) but are, to all intents and purposes, English organisations serving England’s needs in getting undesirables out of England and into Wales; and in the process making life hell for Welsh people and their communities. Organisations run by mysterious figures like Jim Bird-Waddington, who gives no information about himself – just check out the ‘complete profile’ on his blog.

I shall be in Llanelli on Saturday for the 100th anniversary of the Llanelli Riots, in which two men were shot dead by troops. I shall meet a number of people, and the organisation that will finally challenge these and other colonialist insults to our nationhood will come a step closer.